Holidaying by the lake: a bit like it was before, but different. More modern. More exclusive. And with more to pamper guests – both mentally and visually. That’s what awaits at the Alpenhotel Kitzbühel by the natural moor lake, not far from the infamous ski resort.

A handful of the new suites have already been available for exclusive bookings, but the overall project is still awaiting its official opening. It’s scheduled for the beginning of December 2021, the start of the winter season in one of the most glamorous winter sports destinations in Austria – the perfect starting point for a holiday like you’ve never experienced before on the banks of the idyllic Schwarzsee.

As soon as you reach the entrance to the new Alpenhotel Kitzbühel, you’re confronted by a very specific feeling. A feeling of arrival. And well-being. We encounter wood as a building material throughout the simple design of the hotel. It triggers another feeling that overwhelms us after we’ve checked in – a feeling of exclusivity and cosiness. The modern elegance that radiates from the main building after the renovation continues in the rooms and suites. There are new additions in the form of the two annexes right next door: Das Steghaus and the Lakeside Lodges. They have a partly private garden and access to the beautiful natural bathing lake, which you should walk around at least once at any time of year. It’s only from the other side of the lake that you get a superb panoramic view of the Alpenhotel and realise how harmoniously the new architecture blends into the landscape.

"The colour of the untreated larch wood on the new façades gets closer and closer to that of the forest as it weathers. The buildings age with grace and become more and more a part of the natural environment",

explains architect Sebastian Mitterer from the team at Firn architects.

Right by the edge of the lake is Das Steghaus, where we’re greeted not just by unique rooms and suites with a lake view, but also an à la carte restaurant. The theme of untreated wood is seen here as well, underlining the laid-back jetty feel on the sun terrace and in the lounge area, both in summer and in winter.

Warm bronze tones prevail and create a stylish ambience inside and out. Das Steghaus has been visually connected with the lakeside sauna, which provides a view across the Schwarzsee through its glass façade while you sweat. The expanse and the warmth trigger a new feeling in us. We feel at peace and grounded.

A moment of unwinding in the lake breeze room, a lap of the infinity pool followed by deep relaxation in the tranquil dream room round off the experience in the 1,000-square-metre wellness area.

Such a comprehensive renovation arouses curiosity and words can only go so far in capturing the new holiday vibes at the Alpenhotel Kitzbühel by the Schwarzsee. 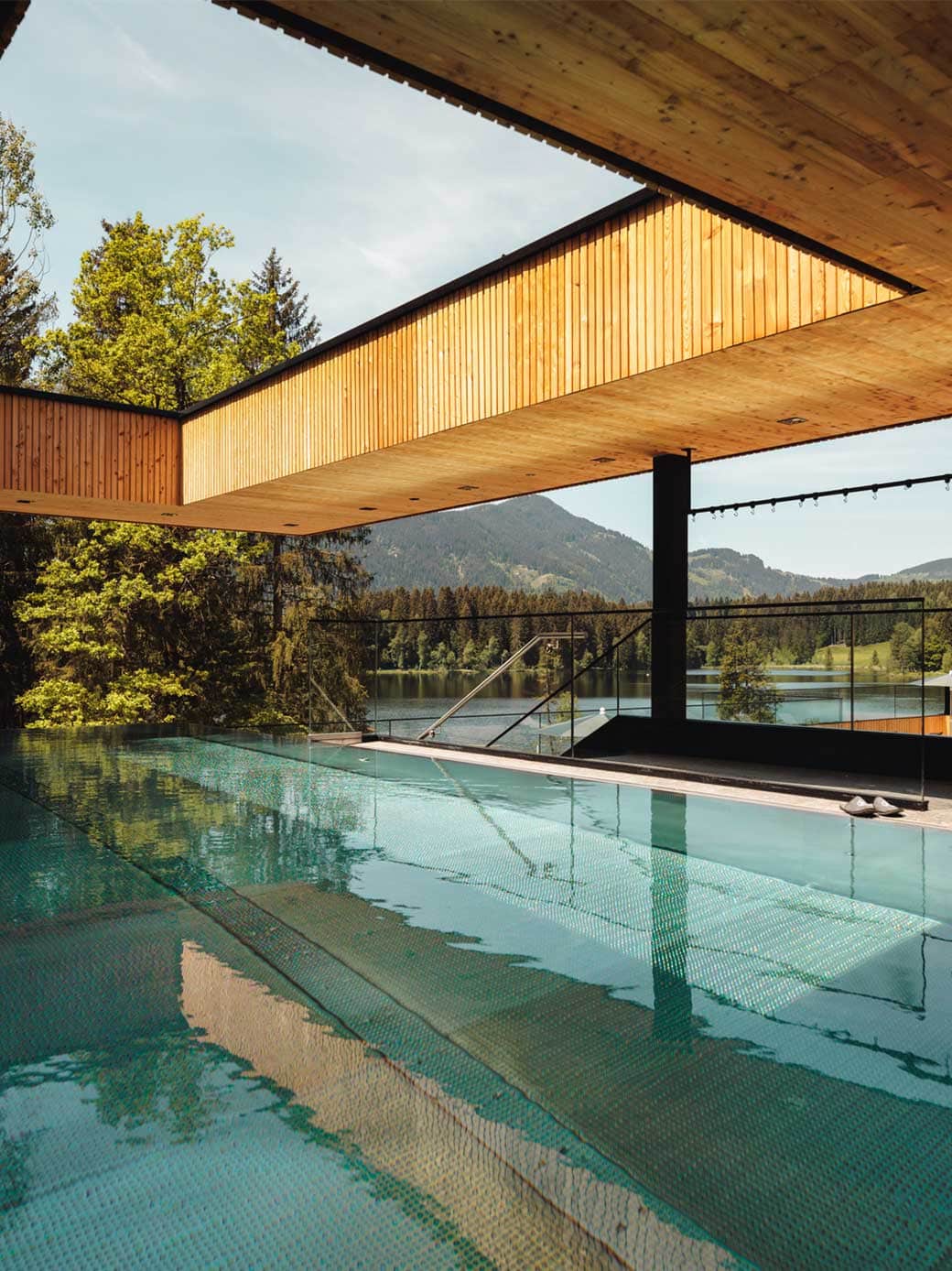