Kent and Britta have fulfilled a lifelong dream together, in their small home village - the Treehotel. Firmly rooted where they were born and raised, their lofty dreams became reality in the treetops.

Kent Lindvall and Britta Jonsson-Lindvall are two seemingly ordinary Swedish Lapland locals who wanted to stay close to their roots and to create a livelihood in their home village.

Kent and Britta are exceptionally creative, full of ideas and an inexhaustible will to push things forward. Sie sind sich selbst treu, authentisch und Menschen, die den Mut haben, ihre Ideen auszuprobieren und ihre Träume zu verwirklichen. Perhaps meeting the right people at the right time also helped them succeed. And they had the confidence to get where they are today. But their success story is also one of hard and long

During their troubled years, it would’ve been difficult to imagine that Britta would one day be standing here in her dress and apron, cooking wild game patties for Crown Princess Victoria. Or that her husband Kent would be out in the world, talking about “the big idea” at prestigious conferences, when he wasn’t busy building the new ‘tree dining terrace’ eight metres up in a tree, whilst Britta and her staff welcome major foreign TV producers, magazines and celebrities from near and far, to the trees in the forest behind Britta’s Pensionat (Guest-house).

How did the idea of a tree hotel come about?

Treehotel has grown like a jigsaw puzzle, framed by resolute goals, hard work, timing, con-tacts, a sense of trends, an ability to capture the quirky and crazy in life, a penchant for personal service and Britta’s motto “it always works out in the end, it does”.

The couple was at a point in life where Kent had built a company providing international fishing trips. Britta had worked with a number of development projects, local, regional and international. One of the development projects led to an old retirement home in their home village, that had been closed for many years, which they carefully restored and turned into a guesthouse, Britta’s Pensionat. The guesthouse was run with love and care but wasn’t gen-erating much income. Something had to be done. Britta participated in a design training pro-gramme focused on form and function within the tourism industry.

That’s where the idea of a design project was born

One day, the then unknown filmmaker Jonas Selberg Augustsén, who has roots in the area, came to the guesthouse. Over one summer, he and his film crew worked on the film Trädälskaren (The Tree Lover) which became his breakthrough production. The crew spent a lot of time at the guesthouse, whilst the film and the treehouse around which it was cen-tered, grew. When the film had been completed, Britta thought it a shame that such a nice treehouse would just stand there in the forest and go to waste. Maybe it could be rented out? Together, Britta and Jonas made it an integral part of what the guesthouse had to offer and it instantly became popular. However, it was far away and required a lot of maintenance work.

What if you could combine design and "tree rooms", closer to the guest house?

Around this time, Kent was on a fishing trip in Russia with a group of friends. These friends happened to be three of Sweden’s foremost architects - Bertil Harström, Thomas Sandell and Mårten Cyren. Kent mentioned the idea of designer hotel rooms and this piqued the interest of the architects. Before leaving Russia they agreed to design one room each, as friends working together, even though they were working for competing firms. Their friendly collabo-ration turned out to be very important for the Treehotel.

It resulted in a UFO, a bird’s nest, a cabin, a mirror cube and a blue cone which changes colour to orange.

These spectacular creations attracted a lot of attention. There were sceptics here and there but eventually many of them also came to land in the bird’s nest and its neighbouring rooms.

International press and designer aficionados from all over the world began coming to the Treehotel in large numbers. Today, the hotel has naturally earned a place on many bucket lists. It has attracted everyone, from international celebrities, designers and fashion magazines, to ordinary people wanting to experience something as unusual as staying in a treehouse. A childhood dream with a touch of luxury and flair.

Kent and Britta are still working hard to earn their pay. The Treehotel is their life. Kent is in charge of marketing, Britta runs the kitchen and their youngest daughter is a huge asset to the company, working with its activities. Together, Kent and Britta keep developing and realising new ideas. The large Dragonfly conference building has been added to the list of popular rooms and in 2016 the seventh room is being built, a suite that will be extraordinary in every sense of the word. Higher up, larger and more luxurious than any of the other rooms.

This story of success is a matter of fact. But it’s no Cinderella story, Britta concludes, in a strong Harads accent. No, with her apron still firmly tied around her waist she, Kent and their hand-picked, incredibly flexible staff, push on with their life’s work, that you as a visitor are part of, now and in the future. They still work hard to realise their dream, which hasn’t come easy, but they can indeed conclude that “it always works out in the end, it does”.

Treehotel is a Member of Lifestylehotels 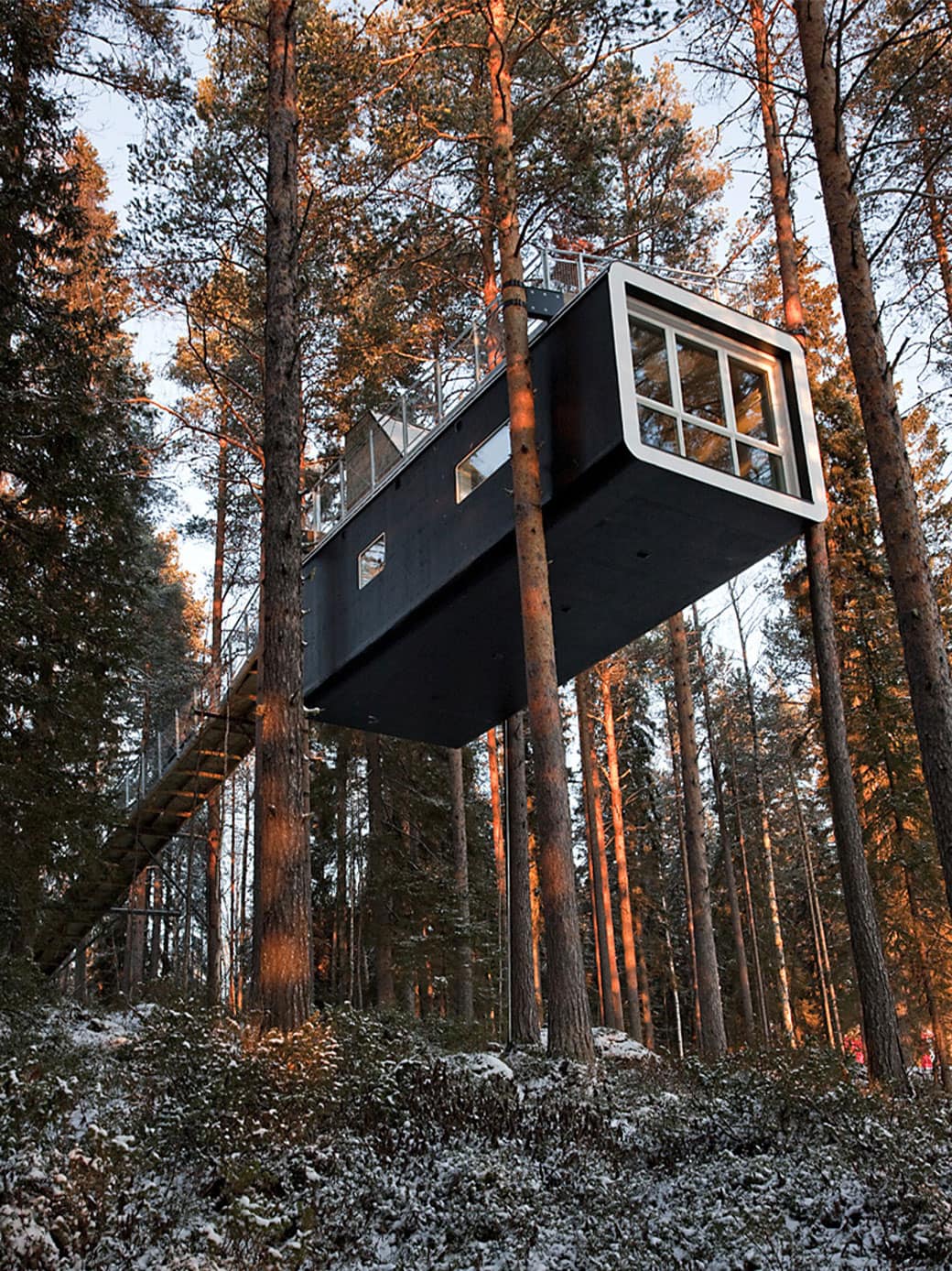